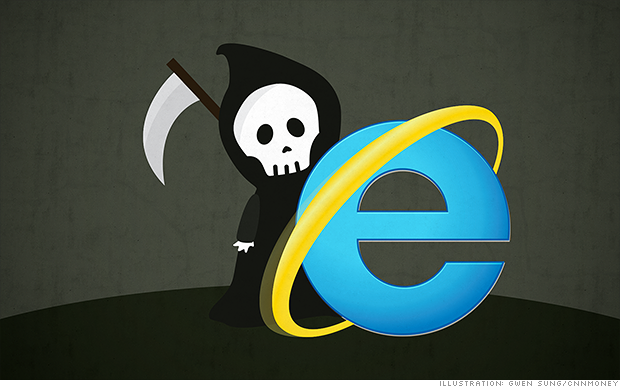 If you think Microsoft should just kill off Internet Explorer already, you might just get your wish.

The browser has become synonymous with bugs, security problems and outdated technology. Even as Internet Explorer has improved dramatically in recent years, it continues to lose serious ground to rival browsers.

Once the most-used Web browser, Internet Explorer had been on a steady downward trajectory for years. Its share of the browser market fell below the 50% threshold in 2010 and sank below 20% in October, according to browser usage tracker StatCounter.Google’s (GOOGL, Tech30) Chrome is currently the browser leader, commanding a 48% share of the market.

This summer, Microsoft (MSFT, Tech30) promised big, upcoming changes for Internet Explorer. Now, it appears those changes could include the once-unthinkable: Replacing IE with a new browser.

ZDNet reported this week that Microsoft would introduce a new, stripped down browser that has been codenamed “Spartan.” It would debut with Windows 10 next year, and it would function similarly to Chrome and Firefox.

The Spartan browser will be built on a different software platform from IE, so it won’t be backwards-compatible, ZDNet reported. That means Microsoft will continue to ship IE with Windows to ensure that corporate apps continue to function properly.

Company IT departments and governments tend to be very slow to adopt new browser versions, particularly if they build custom applications for them. That’s why the most-used version of Internet Explorer stubbornly remains IE 8, which debuted in 2009.

South Korea even passed a law in 1999 requiring that banks and retailers use digital certificates — created by Microsoft, and available exclusively on Internet Explorer.

So IE won’t go away just yet. But this could be the beginning of the end.

Microsoft has acknowledged the steep hill it has to climb to regain consumers’ trust. In an August “Ask Me Anything” chat on Reddit, engineers from Microsoft’s Internet Explorer team said that the company had been thinking about ways to revitalize Internet Explorer — including a new name for the browser.

If Microsoft ultimately decided to send IE off into the sunset, it would mark the end for one of the most reviled software applications of all time.

Internet Explorer debuted in 1995 as part of Windows 95 and became an instant hit. It successfully killed off Netscape Navigator, and it achieved a virtual monopoly in the early 2000s. At its 2002 peak, Internet Explorer commanding 95% of the browser market.

But Microsoft failed to innovate, essentially leaving Internet Explorer 6 alone to gather dust and cobwebs for five years. That frustrated customers and sent them fleeing for greener pastures.

Microsoft finally released IE7 in 2006, but the damage was done — Microsoft paved the way for Firefox and then Chrome to surpass it.

It wasn’t until the release of Internet Explorer 9 in 2011 that Microsoft released a truly modern browser. Still, to this day, IE still doesn’t support extensions, it isn’t available on non-Windows devices, and it doesn’t sync with other devices by default — all mainstays of Chrome and Firefox.

It seems like Microsoft has finally woken up, and just wants to kill the thing altogether. A fresh start makes sense.

Ironically, Microsoft allowed IT departments to dig a hole so deep that it might be years before Internet Explorer will die once and for all.